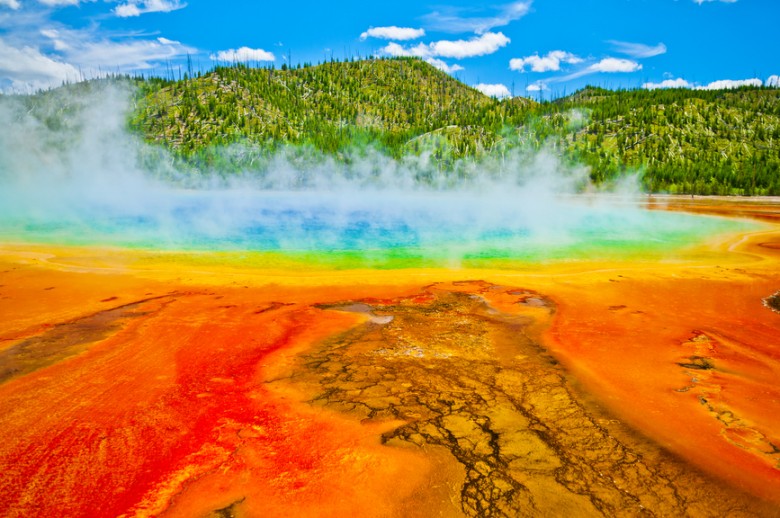 Rising from the Ashes

I had always imagined one’s honeymoon would involve sand, sun, and saltwater (probably because the bulk of my family vacations were spent on the beach).  So while planning our spring 2004 wedding, when Peter suggested we honeymoon at Yellowstone National Park, I was a bit taken aback.  “We both love hiking and nature, and besides, it’s on my list.”

Though not the most convincing argument, I acquiesced, especially since he promised to set us up with quality lodging (no camping or “roughing it”).

Without a doubt, Yellowstone is spectacular. It should be on everyone’s list. Each morning we would drive from the gorgeous Lake Yellowstone Hotel to a different area of the park.  I started to notice some of the stark trees around the landscape… I remembered the intense “Summer of Fire” in 1988.  I couldn’t believe we were still seeing the effects in 2004.  My rocket scientist husband, who has a bit of the encyclopedic knowledge going on, explained that fires were an ongoing reality in Yellowstone, most of them sparked by lightning strikes.  Like most people, I assumed that fires were bad.  I got all Smokey the Bear: “Can’t they do anything to prevent forest fires?  Or stop them?”  As I shot off endless questions, Peter (who avidly avoids the phrase “I don’t know,”) suggested we tour the visitor center by Old Faithful, which told the Story of Fire at the National Park.


I hadn’t realized that there was such an allegory between “fire” and personal “pain and suffering.”
Conventional wisdom—and the average park visitor like myself—views fires as devastating, destroying everything in its path.  We see fire suppression, on the other hand, as good stewardship.

Sounds a lot like our attitudes towards pain and suffering…
Turns out that the amazing scenery in Yellowstone has been shaped by fire; it is part of the ecosystem.  The National Parks Service explains this ecological phenomenon in the educational resources on Yellowstone’s webpage (which, by the way, is where all Yellowstone fire-related facts and figures in this reflection come from):

In the gift shop section of the visitor center, I picked up the book Fire: A Force of Nature: The Story Behind the Scenery, and was struck by a quote on the front page:

“Fire presents opportunities for new life that don’t exist until a burn.”

Isn’t that the truth.

Certainly my own greatest moments of personal growth have occurred in the aftermath of a painful crisis.  The growth might range from learning a difficult lesson to forging a new, better, stronger path.  Sometimes it prompts me to develop compassion, broaden my perspective, and practice empathy.  Other times the crisis has me questioning decisions, priorities, and/or relationships.

And by referring to it as a “mystery” we reaffirm the fact that we don’t always understand how that new life occurs… yet we have faith that it will.

“Fire presents opportunities for new life that don’t exist until a burn.”

As marvelous as it is, it’s also important to see the word “new” in each of those phrases.  New life.  Different.  Things will never be quite the same as they once were.

Anyone who has experienced personal pain and suffering resulting from the loss of a loved one can attest to that truth: Things will never be quite the same as they once were.

Moreover, let’s be honest: pain is real.  Fire burns.  No one is expected to cheer on suffering wearing a t-shirt that says, “Yay – growth!”  That’s not what faith in the Resurrection is about.

What doesn’t kill us makes us stronger.

God doesn’t give us anything we can’t handle.

Everything happens for a reason.

I know they certainly don’t bring me solace.  I can’t imagine a Holocaust survivor or rape victim finding comfort in hearing any of these clichés, either.

The enormity of the Yellowstone “Summer of Fire” in 1988 was unprecedented.  That summer was the driest in the park’s recorded history.  The practice of allowing for “controlled burns” was called into question as the fires burned from June through September, threatening lives and homes in the greater Yellowstone region.

With controlled burns, a fire ignites naturally – with a lightning strike, firefighters monitor as Mother Nature does some “spring cleaning” through the burn, and the fire extinguishes naturally.

The fires that summer were just too big and too out of control.


A total of 248 fires started in greater Yellowstone in 1988; 50 of those were in Yellowstone National Park. Despite widespread misconceptions that all fires were initially allowed to burn, only 31 of the total were; 28 of these began inside the park.  In the end, 7 major fires were responsible for more than 95% of the burned acreage. Five of those fires were ignited outside the park, and 3 of them were human-caused fires that firefighters attempted to control from the beginning.
Between the evil of arson, the enormity of the problem, and the imminent danger to others, Yellowstone National Park needed help.

Ecosystemwide, about 1.2 million acres was scorched; 793,000 (about 36%) of the park’s 2,221,800 acres were burned. Sixty-seven structures were destroyed, including 18 cabins used by employees and guests and one backcountry patrol cabin in Yellowstone.
Yellowstone was certainly affected by the fires, but all was not lost; it was not devastated; it was not destroyed.

The effects on many plants and animals are still being studied, although in the short-term, most wildlife populations showed no effect or rebounded quickly from the fiery summer. In the several years following 1988, ample precipitation combined with the short-term effects of ash and nutrient influx to make for spectacular displays of wildflowers in burned areas.

While we are in the midst of the flames of suffering, it is difficult.  Even Jesus wept.  But that is not the end of the story.  From death comes new life.  We are people of the Resurrection.  Faith in new life is what it means to be a people of hope.

As a people of hope, withstand the fire.  Understand that controlled burns are a part of life.  Ask for help.  And when rising from the ashes, be sure to identify and appreciate “spectacular displays of wildflowers” whenever you see them. 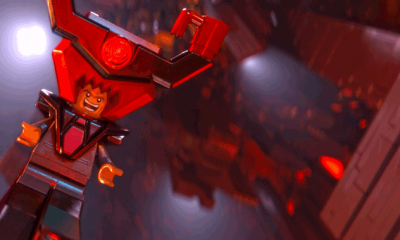 You Don’t Have to be the Bad Guy 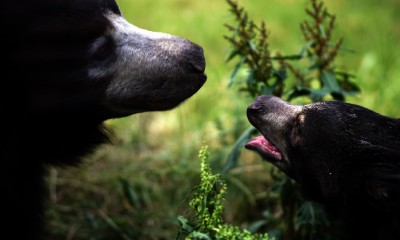 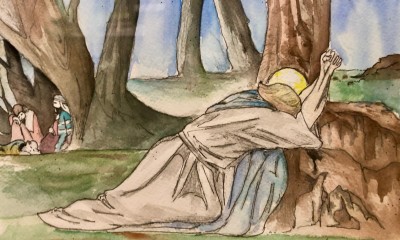 In the Garden with Jesus
4 Comments